FREE SHIPPING on ALL ORDERS!

A viewer named Andrea commented on my review of the FOREO Luna 4 Plus facial cleansing device a few days ago. She loved the device, but asked for more information on how the micro current aspect worked on the skin to reduce wrinkles. In this video and article, I’m going to demonstrate and explain more on how micro current works, not just with the FOREO Luna 4, but also in general with micro current devices. We will hit on the science of micro current, how it works including the amps needed to the greatest effect, why it works, and best practices to get the most from your device.

The Science of Micro Current

According to Medical News Today, Micro current devices work by delivering an electrical current to muscles and skin cells. The idea behind this is that the electrical current will build up muscles in the face, lifting and tightening the skin. Some companies also claim that micro current facials stimulate collagen production.

We measure electrical current in units called amperes or amps. Micro current uses very low amp electrical stimulation in the micro amp range. One micro amp is one millionth of an amp. It’s teeny and it works at a cellular level. In comparison, electro-therapy stimulates your nerves to manage pain in the milli-amp range. One milli-amp is one-thousandth of an amp which is 1000 times greater than micro current.

In Office vs At Home Machines

In aestheticians’ offices, machines use between 335-750 amps of intensity, while at home devices use anywhere between 300-500 depending on the brand. For those scientific nerds out there, that’s 0.1-680 hertz on average. What’s the benefit of going to an aesthetician’s office to have it done compared to a home device? The in-office machines can use a greater voltage, but that depends on the machine the office uses. By way of example, I have had in-office micro current done where I saw an immediate difference, and ones where nothing changed. I’ve also tried at home devices that did a huge amount, and ones that did zero. It’s all dependent on the amps, time, and consistency.

At home devices need to be used between 5-20 minutes, 3-5 times per week. After two months you can slow down to 2-3 times per week. In office they will run upwards of an hour, two times per week for 10-15 sessions. After that you go on a maintenance schedule to maintain the results. Each office visit costs between $60 per session to a course of 10 for $580 and up depending on where you live.

How Does Micro Current Work?

In the video, I show the FOREO Luna 4 Plus with around 280 amps, and Truth Treatments NRGY Device with two levels of five speeds each, with the capability of getting up to about 400 amps. One of the top selling devices on the market is the NuFace Trinity Device with 335-400 amps, and I discuss and demonstrate how these machines work on the skin. As a quick run-down, use a conductor gel to transmute the electricity beneath the skin. It’s the same technique with every home device, and the gel need not be expensive. Just buy ultrasound or electro therapy gel off Amazon ($12) and use that, I haven’t found a big difference in using the pricier transmuter gels and, seriously, we’re in a recession. Apply to the skin and then use the machine in slow upward repetitive strokes starting at the jawline. Don’t use it on your neck, or if you are pregnant or have heart problems. Be sure to research contraindications with the brand you use. 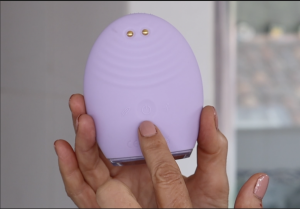 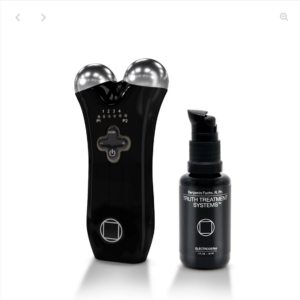 What to Watch Out For

In office machines use a two-pronged device to work the muscles, but whether or not this transmutes the electricity to a greater degree is not consumer published in critical detail. Your aesthetician will use the exact same technique detailed above, but for a longer time period. In contrast, the small nodules on the FOREO Luna 4 will not transmute anywhere near the intensity of the NuFace or the NRGY devices, much less the in-office machines. This means with the FOREO, you have to go slowly and make the most of it if you decide to go that direction. The strongest micro current machine with FOREO is the BEAR with 350 amps, which goes to show it’s better to buy a singular micro current device rather than a multi-use device if micro current is what you’re after.

Get One For Yourself:

I hope this helps to clear up some of the fuzzy content around micro current machines. Please let me know if you have any questions!

SKIN CARE SCAMS AND HOW TO AVOID: MATURE WOMEN
https://youtu.be/adO2zZF7cE4 My friend spend $650 on a fabulous looking skin care line and had ZERO results! How can you avoid this all to common pitfall? Check out my new tutorial on YouTube at Suzanne The Beauty Shaman #the_beauty_shaman
#makeupoverfifty
#makeupover45
#makeuptutorialvideo
#skincaretutorialvideos
#truthandbeautymeet
#cosmetictutorialvideos
#thebeautyshamaninecuador
#proageingadvocate
#positiveageing ...

How can you not disappear behind statement glasses? Check out my new tutorial on YouTube: https://youtu.be/Cg4316ZvErQ and also we are having a Valentines SALE starting Sunday on The Beauty Shaman! Take 15% off Truth Treatments and Image MD thru February 10th. Sign up for our newsletter (on TheBeautyShaman.com) for full information and discount code or tune in to our Instagram Story. YEAH! #overfiftywomen
#makeupover45
#healthandbeautyblogger
#makeuptutorialvids
#cosmetictutorials
#skincaretutorialvideos
#truthandbeautymeet
#the_beauty_shaman
#thebeautyshamaninecuador ...